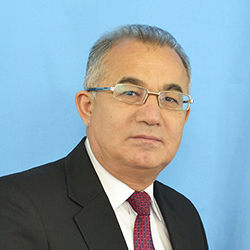 Born on October 11, 1958 in the Zangiota district of the Tashkent region (Uzbekistan). In 1981 he graduated from the Faculty of Law of the Tashkent State University with honors. In 1984 he defended his Ph.D. thesis, and in 1990 his doctoral dissertation. In 1993 he received the title of Professor of International and Comparative Law. Since 2017 he is a full member of the Academy of Sciences of Uzbekistan.

Saidov A.Kh. takes an active part in the work of international forums to strengthen cooperation between the Republic of Uzbekistan and the United Nations and its treaty bodies; European structures such as: EU, OSCE, ODIHR/OSCE and other international organizations. In 2019–2020 - Chairman of the Independent Standing Commission on Human Rights of the Organization of Islamic Cooperation. In 2019, he was elected a member of the Executive Committee of the Inter-Parliamentary Union, and since 2020 he has been the Vice-President of the Inter-Parliamentary Union (IPU).

Saidov A.Kh. has over 350 publications and books in the field of human rights, theory and history of state and law, international, comparative, constitutional and Islamic law, published in the USA, Great Britain, Austria, France, India, Japan, Germany, Poland, Belgium, Russia, China , Korea and other countries.