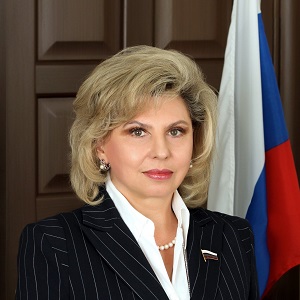 Ms Moskalkova has higher legal education; academic degrees of Doctor of Law, Doctor of Philosophy, and the title of Professor; she is a retired Police Major General.

Ms Moskalkova took part in the elections as a deputy to the State Duma of the third convocation; she represented the Yabloko party in the Rybinsk single member constituency. She lost the elections, having taken the second place.

1974–1984 — the Pardon Department of the Presidium of the Supreme Council of the RSFSR (a record keeper, senior legal adviser, consultant). Job description: preparing draft decisions on granting pardon to convicted persons (more than 3 thousand drafts were prepared).

2007–2016 — Deputy of the State Duma of the fifth and sixth convocation, Deputy Chairman of the Committee on the CIS, Eurasian Integration and Relations with Compatriots, a member of the Commission Controlling Data on Income, Property and Property Obligations provided by deputies of the State Duma; a member of the Working Group on Implementation of Provisions of Annual Address of the President of the Russian Federation to the Federal Assembly of the Russian Federation; Chairperson of the Commission on Legislation and Regulations of the Parliamentary Assembly of the Union State of Russia and Belarus; a coordinator of Russian and Estonian Interparliamentary Relations. A member of the Presidium of the Central Council of the party A Just Russia.

Since April 2016 - Commissioner for Human Rights in the Russian Federation.