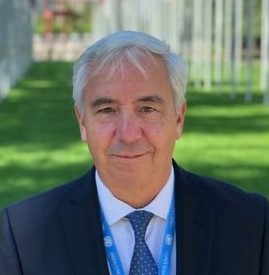 Permanent Mission of Argentina to the United Nations Office at Geneva

Federico Villegas is Ambassador and Permanent Representative of Argentina to the United Nations Office at Geneva.

Prior to his arrival in Geneva, Mr. Villegas had been serving as Argentina’s Ambassador to Mozambique since 2016. He served as the Director General of Human Rights at the Ministry of Foreign Affairs of Argentina from 2012 to 2016, and from 2005 to 2007. He was Argentina’s Alternate Representative to the Southern Common Market MERCOSUR and the Association for Latin-American Integration ALADI in Montevideo, Uruguay from 2008 to 2011.

A career diplomat, Mr. Villegas joined Argentina’s Foreign Service in 1993. He was Deputy Director General of Human Rights at the Ministry in 2003 and 2004, and Argentina’s Alternate Representative to the Organization of American States in Washington DC from 1995 to 2003. He also served at the Directorate of International Security, Nuclear and Space Affairs at the Ministry of Foreign Affairs from 1993 to 1995.

Mr. Villegas has a Master of Arts in liberal studies from Georgetown University, Washington DC (1998). He graduated as a lawyer from the National University of Rosario in Santa Fe, Argentina (1989). He also attended an intensive programme for human rights at New College, Oxford University, United Kingdom (1999), and has a human rights diploma from the International Institute of Human Rights, Strasbourg, France (2001).